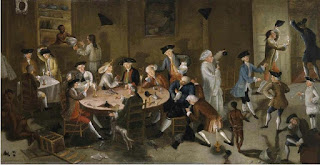 Factoring Agents in the Olden Days
By Jeannette Holland Austin

A factor is an agent who transacts business for another. In colonial days there were tobacco and cotton factors. In other words, shipping tobacco to England, the West Indies or elsewhere, required an agent to sell the crops and handle the business transactions. In 1672, one of the factors of George Lee, an English merchant, died in Virginia. At the time he was indebted to his principal for 700 pounds sterling. His property was passed into the hands of his mother who appointed an attorney to take charge of it. The whole estate was converted into tobacco, a crop which he was about to ship to his own consignee in England. The General Court interposed with an order requiring him to transfer the entire quantity to a third person in the mother country until the justice of the claim of Lee onn the property of his deceased agent had been decided. Also, all of his account books went back to England. As was the common practice, widows had plenty of suitors owing to a shortage of females in the Virginia colony. This is how the goods of an estate went into the hands of the second husband who very often showed no scruple in dealing with them as his personal property. Such was the case of Thomas Kingston, the agent of Thomas Cowell who owned a plantation in the colony about 1636. Upon the death of Kingston, his relict became the wife of Thomas Loving who appropriated the credits and merchandise of Cowell. Cowell petitioned that Loving be required to take an inventory of the property in his possession and to give bond in a large sum to hold it without further purloining it.
#georgiapioneers.com
#virginiapioneers.net
#southcarolinapioneers.net
#kentuckypioneers.com
#northcarolinapioneers.com
#southeasterngenealogy.com
#genealogy-books.com

Posted by Georgia Pioneers at 4:16 PM