A SC Hero of the Alama #genealogy #history #southcarolinapioneersnet 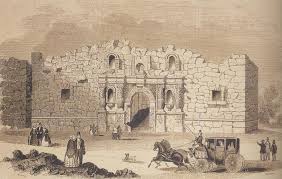 South Carolina Hero of the AlamoWilliam Barrett Travis, hero of the Alamo, was born 9 Aug 1809, about four miles from Red Bank Church in Edgefield County. He was the son of Mark Travis, Sr. William studied law under the Honorable James Dellett. In 1835 he left his home in Southern Alabama and removed to Texas. Travis sympathized with the Texans against Santa Anna, the dictator of Mexico (of which Texas formed a part) who was endeaving to consolidate all of the power in the central government at the capitol city. In 1836 Travis was in command of the fort, with only 144 men and 14 cannons. He called for Santa Anna's surrender but the dictator ran up a blood-red flag proclaiming "No Quarter!" We know the story after that.

Need to know if your ancestors left a will or estate record?  An easy, quick (and free) way to find out is to click on the links below.

Posted by Georgia Pioneers at 1:23 PM

Labels: SC Hero of the Alamo