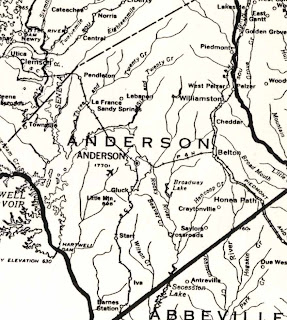 In 1777 after Cherokee Indians signed a treaty ceding its lands to the state, part of the Indian Land became known as Pendleton District (the old deeds also refer to it as the Washington District). In 1790, the town was Pendleton was founded, later becoming a popular summer resort for low country planters in the nineteenth century. In 1826 Pendleton district was divided into Pickens and Anderson Counties. Anderson County was named after the Revolutionary War General Robert Anderson (1741-1812). Most of the early settlers of this area were Scotch-Irish farmers who moved south from Pennsylvania and Virginia in the eighteenth century.
Early settlers: Drennan, Cox, Morris, Bruster, Watkins, Sego, Chappell, Thompson, Stephens, Hammond, Willson, Tatum, Leonard, Reeves, Neel, Hamilton, Rainey, Herring, Trotter, Rosamon, Morrow, Anderson, Russell, Lawrence, Shelton, Douthit, Dilworth and Pickens.  To view wills added to South Carolina Pioneers, click here
"Find your Ancestors on South Carolina Pioneers.net"
"Subscribe and view documents"

Save money. Subscribe to South Carolina Pioneers.net and Georgia Pioneers.com for one low price

Posted by Georgia Pioneers at 3:13 PM