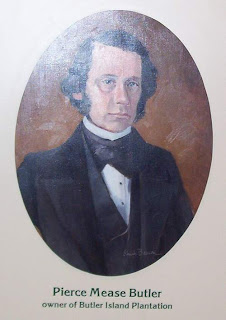 Major Pierce Butler was the first ancestry to America. He came from Ireland and was a descendant of Ormond, the celebrated Jacobin Duke. The family seat was in Ballintemple (Carlow), Ireland. This is where Richard Butler was born in 1704, a son of James Butler and his wife, Eleanor (Loftus) Butler. Richard died 25 December 1771. His son was Pierce Butler was
buried in the Christ Church Yard in Philadelphia. Pierce Butler (above) came to America as an officer in the British Army, but resigned his commission to marry Mary Middleton of Charleston on 10 January 1771. Polly, as she was called, was a daughter of Thomas Middleton and his wife, Mary (Bull) Middleton of Charleston. Pierce established large plantations along the Charleston coast in South Carolina. His thousands of acres established and supported a rich economy of rice and cotton. The complete genealogy is available to members of South Carolina Pioneers
Posted by Georgia Pioneers at 11:09 AM